The Kruger National Park in South Africa is an internationally renowned destination that offers the world's greatest safari experience. It is unmatched in terms if the diversity and quantity of African wildlife and the beautiful vastness of its landscapes.

The park is part of the Kruger to Canyons Biosphere, an area designated by the United Nations Education and Scientific Organization (UNESCO) as an International Man and Biosphere Reserve (the "Biosphere").

It is an astonishing testament to the chasm between modern society and the raw wilderness of Africa. Acre after acre – 5 million of them in fact – is packed with the fascinating components of an intricate ecosystem unspoilt by the heavy hand of man's so-called progress.

This vast park is the wild heart of several private reserves and concessions including the Sabi Sand, Timbavati and Kruger Private Concessions. To the North, the gargantuan transfrontier peace park straddles three countries and covers a staggering 8.2 million acres.

The Kruger National Park and the surrounding private reserves are the heart of South Africa‘s big game country. It is here that you`ll find the country`s most famous private lodges and some of the best wildlife viewing in the world. 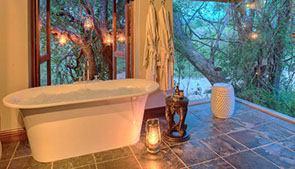 An exclusive 5 star lodge, Savanna is situated in the internationally famous Sabi Sand Reserve within the greater Kruger National Park conservancy. Savanna lies in an area where 'Big 5' sightings are so frequent, it is not unusual to see lion, leopard, elephant, buffalo and rhino in a single game drive.

Named after Colonel Stephenson Hamilton, who was instrumental in establishing the world famous Kruger National Park, Hamilton’s Tented Camp reflects a safari adventure of the early 1900’S, where grace and style were the epitome luxurious living.

An earthy, traditional Tsonga styled lodge, Hoyo Hoyo offers luxury in six beautifully furnished thatched suites. The combination of the bush, traditional cuisine, the warmth of the accommodation together with the opportunity to witness the lifestyle and culture of the Shangaan people, ensure an unforgettable safari experience.